Customer not happy with me

Gud day sir Humphrey, You have still not given me any answer on the question I asked last time. And am no longer enjoying your post cos I've not been getting the real thing from it what I need to know more about are all this hard faults in LG, Sharp, Sony, Toshiba & Panasonic thanks

Which answer? I remember giving you enough info on what you asked, checking from my communication to you I have written over 100 emails to you only.

This is the highest I have ever done. Could it be you do not read your book well? In electronics there is no cut and paste, even if you replace all the components in the TV and fail to pick the faulty one the machine will not work.

The good thing with electronics is that 90% of the problems are easy fix and the 10% is tough. 90% is enough to pay your bills so you should encourage yourself...Regards Humphrey

Hello sir the question that I ask which I said you've not answered is this. The LG 21inches that has a boost and cut fault which I asked for ur help last time and also the sharp with the same fault, the truth is that have waited for a reply and still using the formula you gave me it didn't work out so I have to send it to co technician and even more than what I charged the person that owns it and worst about it was that it didn't even take him more than 15mins to fix. What he did has nothing to do with your reply, you see why I sent you that people around my area knows how I try in doing the job. I started with you cos I wish to be best but it seems I just wasted money just to know the correct names of all the component in electronics which is not just I need the faults u send on ur post about dry joints filter capacitors being changed is not just the main thing as a matter of fact what the guy did on that TV was just pulling a transistor which was OK and the TV started functioning well how would I have done such. Pls i need to more enlightened regards Dominic

More confused now... The guy pulled a transistor which was OK and the TV worked?

Pls help check this transistor on this circuit: I see if you will know the function cos I have done the same on another one and it worked, the no: is q16, Here is the location of the said transistor 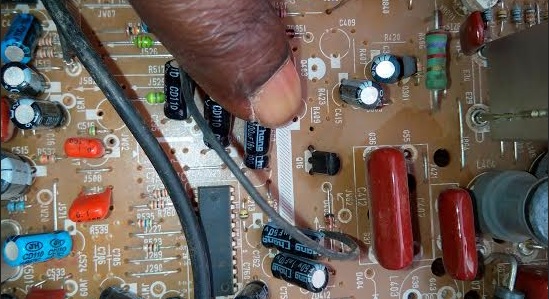 Thanks, kindly send me the actual model of this TV written on the back cover. So that I can get the circuit diagram so that I can know what it does. Hope it not for x-ray circuit… That would be disaster to the user due to radiation.
Regards Humphrey

I did not get the model but after doing some research i came up with this...

Hi Dominic,
Attached find transistor q16, and see its purpose. Actually my fears are confirmed... X- ray radiation protection ... If this is what we do to get money via repair while exposing your customers to cancer causing rays... Am out!
Regards Humphrey 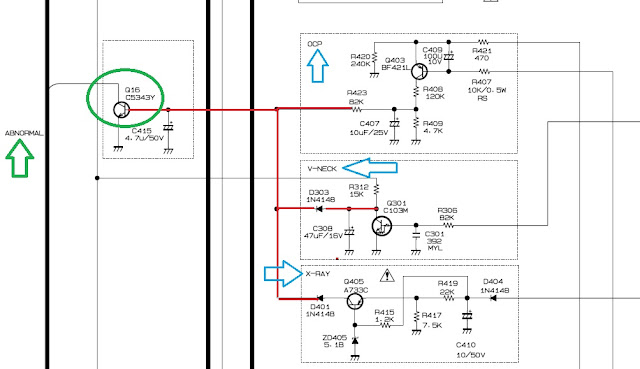 I told you that it was done by another technician and it has been working, even though I asked him why it was removed and he couldn't explain. The guy is a technician that works in lg service center around my area and this is exactly what he has been doing on others and he was taught by the white man that owns the company, I sent you this because I tested the transistor and it was OK pls I need to know what to do in a case like this

The better way of doing it is to get the component which is causing the abnormal operation/fault.
1. B+ is very high
2.Vertical circuit faulty
Regards Humphrey

But sir I tested the b+ voltage and it was OK the vertical OK too I even tested the whole component connected to the transistor but to no avail.

Could also be over current protection... Remember saying when you remove vertical I.C voltage go up?
Regards Humphrey

Conclusion
Electronics equipment’s are designed with safety controls just in case something go wrong, on the power supply we have the main fuse which usually blow if there is a short on the supply to prevent the equipment getting fire and causing injury including setting property(house) on fire.

On the side of HV circuit they also incorporate X-ray circuit, this circuit is so critical that if the HV increase too much the circuit will trigger shutdown to prevent the user from getting dangerous X-ray radiation which are harmful to the health.

In human being God in his wisdom incorporated this safety control in form of pain, that is why if your foot step on fire the signal(pain) will be send to the brain and the brain will send a command to the affected leg to reflex(react) very fast.

This will save your foot from getting maximum injury, if there was no pain mean you will realize when you find  two third of your leg is lost through fire.

I consider this the same thing when one dis-able the X-ray circuit in the name of making profit: there is a saying from the Bible “that do to others what you would like others to do unto you”

I rest my case.