Causes of retrace lines on the CRT Television screen

In the last article by Mr Beh, you noticed that when the television came up the first time..Still there were white lines observed on the upper part of the screen.

In electronics one can get a lot of clues on the faulty block if one is keen and understand well how different blocks works and possible symptoms when they fail. The more you understand the basic functions of each block the higher the chances of localizing the circuit causing the trouble faster and hence saving on time.

Let us first start by differentiating between retrace lines and just lines:

A)    Lines on Television screen refers to straight lines across the screen like the ones shown on the picture below. Lines usually cover part of the screen but not whole screen. 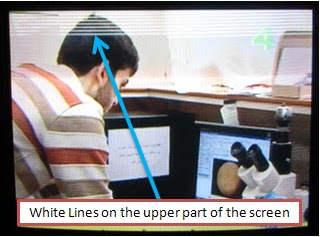 B)    Retrace lines on the CRT Television screen refers to horizontal lines which covers the whole screen from top to bottom but they are never straight (sloping). 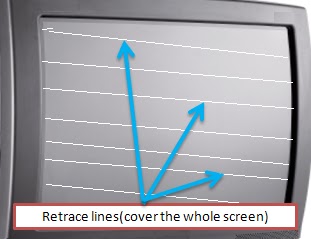 Usually Lines which covers parts of the screen are mostly caused by a fault on the vertical circuit particularly Capacitors ESR gone high. And for Retrace lines they may be caused by the following:-

A)     Blanking Circuit- As electron beam move across the screen of the television scanning from left to right and back usually causes retrace lines, but this never happens thanks to the little known blanking circuit which erase(Blank) those lines which could have been otherwise visible Very fast. But if this block fails then retrace lines will be visible on the screen.

B)      G2(screen) voltage set too high- The Screen Voltage on the other hand if it is increased a lot will causes retrace lines. So next time you change a fly back transformer and find the television is up but the screen has retrace lines try to adjust the screen knob to lower the screen Voltage. The screen will be too bright also.  Usually if the screen voltage increases alone it could point to fly back failure and therefore should be replaced.

C)      RGB Supply too low –On the other hand if the supply to the RBG amplifier is low also usually causes retrace line on the screen and the screen will also be very bright. If this voltage is low it could point to the filter capacitor for that line being faulty(please confirm or replace it directly)