In the last Article Part 1 of the above Television repair, Mr Beh promised to come back with part 2 of the same Television and maybe you were wondering what is it for if the machine worked…
This is because even if the television was up and running it was not 100% because if you were keen you could see some white lines across the upper part of the screen.
In this article you are going to see the power of term work and networking at its best in the following case…
By the time that report was being published this conversation was still going on in the background.

Mr Beh: DEAR HUMPHREY thanks you so much of your encouragements. But still this tv has problem with screen i have three big horizontal line in the screen in the top. Also you can see on that picture that i sent you. The picture tube also is suspect. The case is under process i will send you the result as a second report of this tv. Today i will have consultation with another repairer friend about this case. Kind regards beh
Humphrey: Hi Beh, Those horizontal lines point to bad capacitors around the ic...check the esr of those cap first.... Humphrey

Mr Beh: HI HUMPHERY thank you for your suggestions. Yes i check all caps except very small ones less than 1 micro i did not found any thing also i do not have any equipments to check the esr less than 1 micro any way thank you
beh

Humphrey:  sure there is no meter to test cap esr less than 1 micro......i can see your frustration on your face man...
i have been there many times and back....am telling you the experience you are getting is for life time...
finally please see attached file for more info....also be sure to re solder all components around that ic.
Best luck
Humphrey

And with that a little background of the events let join Mr Beh for round two of this Sony television repair...

In the first part of this report I explain repair of the power supply and TV start to work. But the TV was not fixed completely because of white lines in the Upper part of the screen. 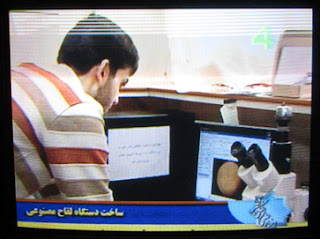 This problem could be of following

i concentrate on G1 circuit and I did not found any problem in that section. Mean while I received some information from MR KIMATHI he sent
me the diagram of LA ic and (suggest me to check the cap strongly) 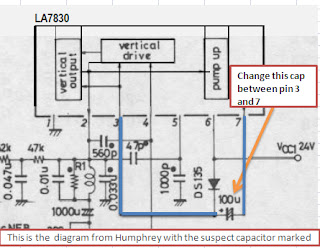 I start to check this Electrolytic cap 100 micro@ 35 volts. I pull it outside the board and I check with ESR meter the meter showed infinity but meter must Show at most 0.5. Also I check the cap by capacitor tester .tester must show something near 100 micro farad but Showed only 0.481 microfarad. I assume that the cap must be culprit .by changing the cap with new one the TV starts to work with no white line in the upper side of screen and white horizontal lines disappeared. Thank you MR KIMATHI for your on time info. 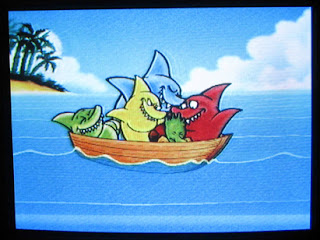 White lines are disappeared from upper portion of screen.
In Conclusion by Humphrey

From this article one can learn two very important principles about life:

Here giving does not necessarily mean giving money but all kinds of giving may it be time, sharing ideas etc..let take a look at the analogy with a river…A river always flow giving water to other small rivers until it finally give everything into the ocean and see rivers are always fresh and never dry up. On the other hand the ocean only receive water fresh water from rivers but because they don’t give out they remain salty forever…here mr Beh decided to follow the river model and shared his idea to the whole world and in the meantime got refreshed by being given an idea which maybe if he never shared this with us it could have taken him long to know.

Another important one…here let me use another analogy..it is said that the power of 3 men combined is more that each man added together…you ask how can it be mathematically…let me explain with an example…let assume you are driving a car with 3 strong men and all of a sudden the car stop and therefore need a push to start..So the three men get out of the car and the first guy one by one start pushing the car…one man… no stat.  And the second man...No start. And then bring in the third man and there you go the car now starts.

So we can conclude that mathematically the force of the three men is more than the force of each man individually and hence you can see why you should think teamwork in your next assignment.

thank you guys
let meet in the next class...