CRT Television and monitor are affected by the Earth magnetic field and for this reason Engineers designed the degaussing coil in order to take care of this effect which is usually manifested by colored spots on the screen.

Besides the magnetic field caused by the earth there are also other causes like placing strong magnet near the CRT television and therefore it is advisable to keep Speakers away from the set, usually when you find a television has spots on the screen first be sure there is no speaker or big radio(speaker inside) near the set. 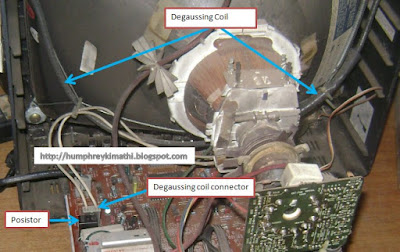 Effect of the power supply when the Posistor fail:

1. Open - No effect on the power supply, only lose the demagnetizing effect of the degaussing coil (picture with spots)

2. Short - If the posistor shorts it means the coil will create a direct shot to the power supply and therefore fuse will blow.

In conclusion I wish to encourage technicians to take time to check the circuit diagram in order to see how the component is positioned (series or parallel) to the supply because by this one can be able to conclude the effect that component can have if it fails shorted or open.