I received this microwave from a client who wanted it checked by a technician.

Initial test indicated the machine was totally dead, I opened it and tested the power supply fuse and found it okay.

Next, I checked the control panel and found inductor L101 was open, I followed that line and noted it was feeding IC100(NK364PN) and therefore suspected it could be shorted. 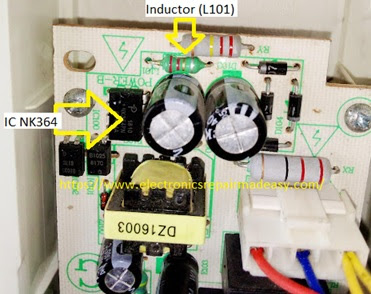 The best test for I.Cs is direct replacement and hence went to the shop looking for one but I was not lucky.

Next option is to import, I got it from Ali.Express, took two weeks to ship to Kenya.

I informed the client and said he has no problem with that and hence I placed the order.

For the inductor I bought is locally and therefore waiting was for only the I.C.

I received the I.C in my hands after two weeks and did the replacement and after applying the power I was happy with the results.

I informed the client and was very happy, just when he wanted to come to pick it I noted something very strange.

The machine was getting very hot, around the magnetron side of the out cover.

I opened the machine and noted the fan was not rotating and therefore needed some tests. 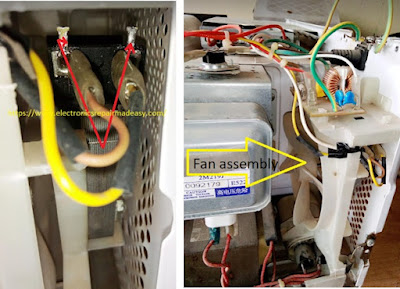 I tested across the fan connectors and got open circuit, I removed it out the machine for further scrutiny and noted one side coil wire was broken out of the circuit.(hanging loose)

I did the re-soldering slowly and carefully and now the reading was 405 ohms. 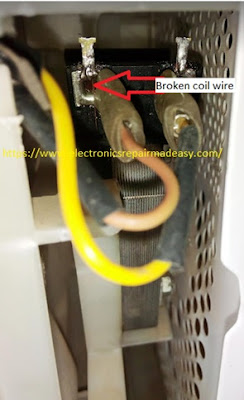 I re-installed the fan and after testing I was happy with the results. 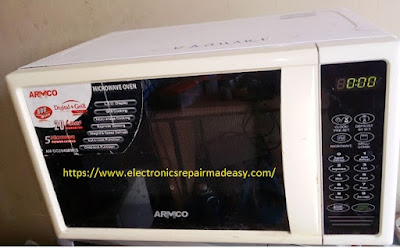