I received a complaint from one of my friend that his Yashika CRT television has stopped displaying pictures. 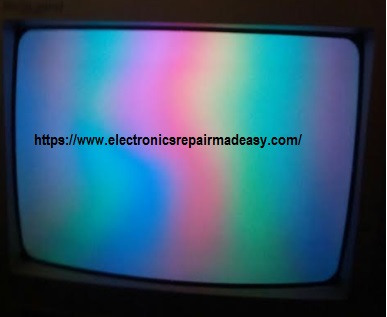 I passed by his house to confirm what he told me but unfortunately there was no power. I decided to open the cover to do a bit of components testing at the power supply but all components were found to be okay.

I removed the motherboard and took it to my workshop, since my CRT neck board pins were the same I replaced my working TV board to the faulty TV and the Tv worked fine, with that I concluded that the tube was okay.

I reinstalled the motherboard back to the original tube and did voltage testing around the vertical section, for your information the i.c used in that section was LA 78040.Testing the voltage at pin 2 I could not get any voltage.

I soldered it out to check whether the voltage would appear and to my surprise after re-testing I got 15v indicating the secondary diode, and filter capacitor to that pin where OK.

I replaced the vertical i.c with a new one and this time the line on top of screen disappeared but after 3 second symptoms the screen had red, green, blue wave bars sure I have not seen this in CRT TVs but in computer monitors.

I consulted my fellow electronics technicians one told me to check the degaussing circuit, another one told me maybe the CRT tube had problem but since my CRT tube was working fine with my motherboard I said it was not the problem.

I tried to solder all the dry joints but all in vain. I almost gave up but I decided to do check the voltages around the vertical I.C. again.

At pin 2 the voltage was not stable it even dropped from 15v to 4v. I guessed something might be failing when under full load.

I unsoldered the filter capacitor 470uf/35v and replaced with a new one. With disbelieve the wavy color bars disappeared and the display was blue.

I connected a cable from dstv wall socket and did auto searching channels and I could see clear pictures. 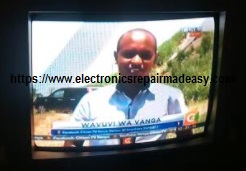 This article was written by Justus Mwinzi
Works as an electrical maintenance engineer.
And do electronics repair part time
Location- Embakasi Nairobi -Kenya.