A friend of mine called me to pass by his place to check on his television which was indicating no signal on the screen.

After passing by I went straight to the antenna connector at the decoder and noticed that it was loose which I re-connected and the problem was solved.

After the signal was restored I noted the picture was not covering the full screen at the top and at the bottom and I pointed it to the owner seems like the TV also has another problem but according to the owner he was okay with the set.

I went my way and after two to three months I received an urgent call from the same guy and this time he told me the TV is now dead with a single horizontal line across the screen and this brought to my remembrance that the TV has already started showing vertical failure symptoms when attended it last.

I passed by his place and took with me the inner board to my workshop since there was no point of carrying the whole tube.

I started scanning around the vertical circuit and I picked one capacitor C457(2200uF/35V) which has top slightly swollen. 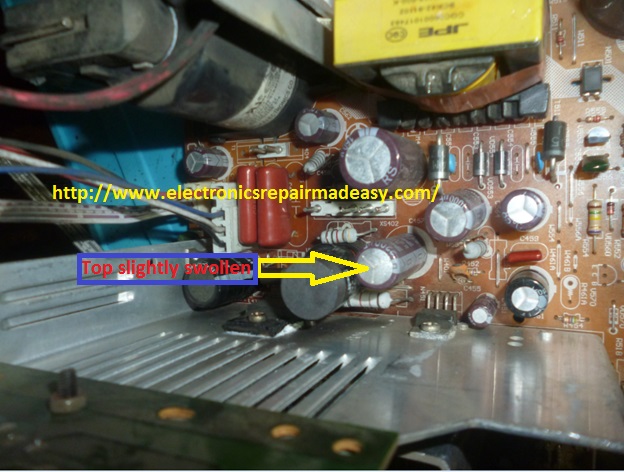 I decided to google this model from the internet so that I can get to know why this capacitor has such an impact on the vertical circuit and this is what I found. 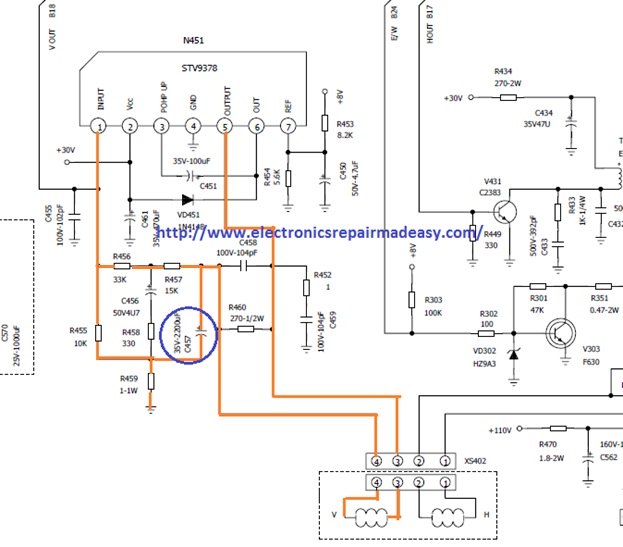 Looking at the capacitor C457 (2200uf/35V) you will note that its main function is to block DC and Allow  AC in this case the vertical pulses to pass through to the vertical yoke.

So once this capacitor dried up blocked the vertical pulses from going into the vertical yoke and hence the symptoms.

Please remember all voltages to the vertical I.C were found good and therefore next time you get such a problem it is important to check this capacitor before replacing the vertical I.C.

After replacing this capacitor brought the TV back to full screen.
at November 02, 2017