This television belonged to my sister; she called me to pass by and check on it.
I inquired from her what the problem was so that I can begin to digest the problem in advance.

She said she was watching a program and the TV screen shrunk.
At first she spoke about a line on the screen but upon further interrogation she confirmed to me that the screen wide was narrow and there was no visible picture on the screen.

The following day I passed by but unfortunately there was no electricity in the area.

Now that I was not able to power on the TV to confirm what she said I told her to show me how the problem was on the actual screen and this is how she pointed out on the screen. 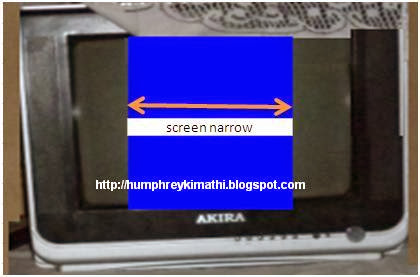 From that I concluded that there may be a problem with the power supply, did I say power supply? Yes power supply problem can manifest itself in many different ways and in this case I suspected supply to the horizontal circuit has a problem or failure in the actual circuit.

With that I opened the set and carried the TV board with me to my workshop for further testing.

After taking out the board I just took off and didn’t do any visual inspection until I reached the workshop is when I pulled out the board from the carrier bag  and when doing random scan on the board I noticed two big electrolytic capacitors which had their top slightly swollen. 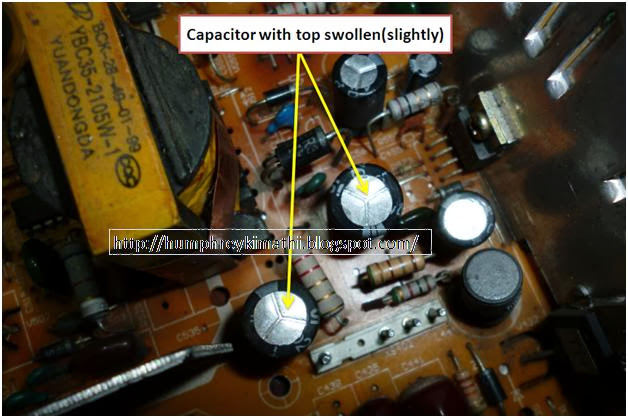 I pulled my ESR meter and upon testing them in circuit I noticed that the meter remained High (OL).

I decided to solder them out and test them out of circuit to confirm this high ESR.
Upon removing them out of the circuit the reading remained high and considering my ESR was rated 35 ohm maximum this means these capacitors ESR was over 35 ohms. 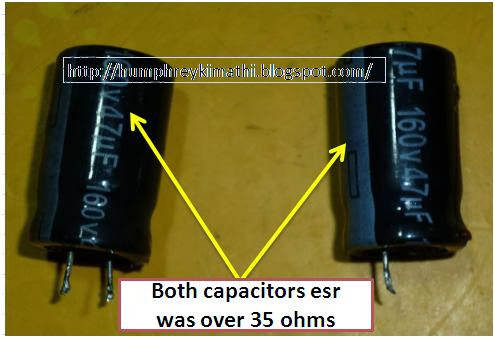 You can imagine this considering the good capacitor of the same size is less that 1 ohm and this explains the symptoms on the screen.

As you can see both capacitors are rated 160V (working voltage).

This is actually the main filter capacitor for the B+ voltage which supplies the horizontal circuit and this actually confirms that this indeed was the culprit which was causing the narrow screen (wide).

My sister called me to find if the TV is okay and I told her Yes. She asked my how do I know and because the component I replaced were also responsible for the wide circuit then the TV should work fine assuming  that there is no other problem.

I went back and re-assembled the board back to the tube and upon powering on the TV came back to normal and she was very happy.

I was also happy to see that I have put a smile back to my youngest sister.