This Television belong to a Colleague of mine, She has a phone which she wanted me to check for her which was having some problems and in the course of our chat she told me that she also has a TV which is lying in her house and if I know a good technician who can look at it.

I asked her what does she mean by a good technician and told me she no longer have trust with technicians because of previous experiences with them…I did not like to go into details of her past experiences with techs and therefore I offered myself as a possible option if she wouldn’t mind.

She agreed but the condition was that I must repair it on site, I requested her, the possibility of me taking the motherboard alone with me for troubleshooting and repair in my workshop and come back to her to re-assemble the set in her house.

That option also didn’t work and therefore having no other option left for me, I decided to do it on-site (while – She - wait). Besides from the description she gave, I knew it is not a major assignment as you know with single horizontal line on the screen that directly point to a problem on the vertical circuit.

So I gave her an appointment for the following day after work, in preparation for the day I took a small digital meter(the eyes of the technician), a screw driver, half feet long solder wire, solder gun, solder sucker and a side cutter and placed them in my on site traveling bag.

Also because from my experience with these China made TVs I carried with me some two Capacitor rated 1000uF/35v and 470uF/35v. Both capacitors filter the vertical supply power and they have a very high failure rate.

Come the appointment day and I went to her place ready for the task ahead. The television was brought on the dining table which for now was to serve as my repair work bench.

As usual I had first to power the TV on to confirm what she told me and also to get any other clue from the screen itself. After powering on, the TV came up and indeed there was a horizontal line across the TV screen.

Looking at the line keenly I could see the line was not smooth but had some waves like on the sides. This could points to dry joints or loose connections around the vertical circuit. I tapped the Television softly with my bare hands and the line (horizontal kept on changing) which further indicated the possibility of dry joints.

I opened the set and did some scanning on the secondary side of the power supply on the component side and I didn’t see any suspicious component, then I turned the board to the bottom side and went straight to the vertical ic (LA 78040) 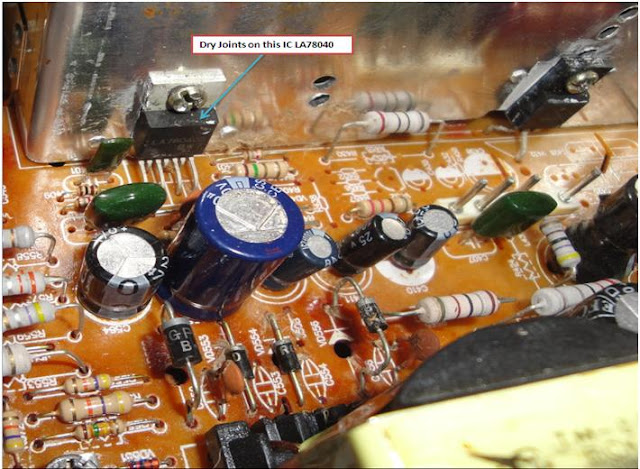 Without magnifying glass I could see two big dry joints (I mean like pot holes on pin 2 and 6 of this I.C LA78040) below is the datasheet of this ic. 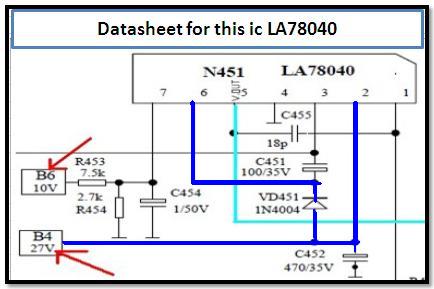 Looking at the datasheet above you can see pin 2 and 6 supply this ic with the much needed 27 Volts supply from the secondary of the power supply.

The 27 volts goes through a diode and it is split into two, one line goes straight to pin 2 and the other goes to pin 6 always through a diode and therefore expect a small drop across this diode of about 0.7 volts (so the voltage at these two pins will be almost equal (+ or –) 0.7 Volts of each other.

After re soldering all suspect areas it now time to power up…usually after repair I like powering the set via series limiter bulb but because I never carried it to the site I had to do it directly.

I pressed the power ON button and nothing happened. Even the horizontal line is not there…DEAD. I tried to listen to the signs of life from the TV and I could hear some sound from the secondary side of the television.

What could have happened now? I figured out that because this TV was having a horizontal line before and now it’s not powering on it could mean that there is something I have done wrongly in the course of this repair…and the most probable thing could be while I was Re-soldering the dry joints I could have shorted a components pins or path because the light was not enough to see the solder are perfect.

So without the magnifying glass I used my meter set to continuity range to try to locate the shorting path/component pins. There was a connector I had re soldered and I went straight there to confirm if it was ok. After testing the two pins I could hear the meter beep (the connector had three pins and all the three had beep)

After further investigation if noticed this is connector for 180 volts RGB supply, heater voltage and heater ground. The heater pin and ground should have a beep but not for the 180 volts. So did some cutting between the heater supply pin and the 180 volts supply until I heard no more beep.

Again I powered the TV and this time the TV didn’t disappoint me…it came up nicely.

A word of advice to new technicians.


I would not advice you to repair equipment at the owner place unless you are very confident with yourself.

You can easily forget and discharge one of those BIG electrolytic capacitor with a screw driver and with the sounds it makes and the sparks generated you might find everybody running out of the house with the fire alarm already activated for fire fighters to come in to put the fire out which they perceive you have caused.

Wishing you all happy repairing.