First I measured the voltage at the main Capacitor and found it was normal i.e. around 300 Vdc on 220 Vac) for countries using 110 Vac expect around 155 Vdc across the same Capacitor).

I also measured the voltage at the Chopper transistor (S.O.T) and found the same voltage at its Collector leg (middle).

I checked the output voltages and none has voltage.

Measuring the B-E voltage of the S.O.T was zero meaning the transistor is not switching.

I measured the Vcc pin of ic3842 no 7 and found it has voltage of between 12v to 14v but pulsing. The voltage was within the normal expected so I ruled out any short on the I.C other legs of the ic3842 has some voltage but also pulsating.

I also disconnected the B+ line and used a load to see if there is short on that line, still there was no output. I checked all the output diodes and all were ok. So I suspected there could be still a problem on the primary side.

I checked all the capacitors on the primary and the all tested good. Then I started checking the resistors, usually when testing components I usually disconnect one leg to be sure I am only measuring the component in question.

After measuring a few resistors I bumped on one high value resistor which was open completely i.e. 160 K resistor now total open. This was a new experience to me and I was very happy to experience such a behavior. After replacing the resistor the machine worked again like new.

Please see the resistor which was open in the circuit below: One of the two resistors from the 300 Volts rail to pin 3 of the ic3842 and the Source of the S.O.T transistor (F.E.T) was open.

I think if I had used the voltage check from the 300v rail to the I.C or transistor I could have gotten the culprit pretty easily than removing all the components from the circuit and measuring them out of circuit. This is especially easy when one has the circuit diagram to guide you on the major voltage paths. 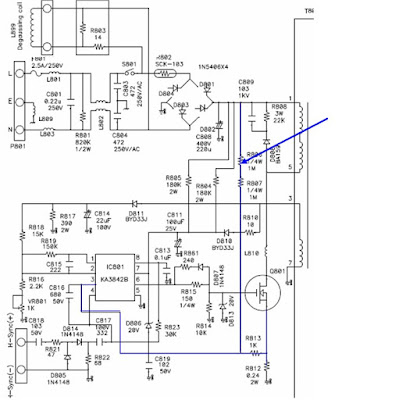