I got a phone call from a client who wanted her Television checked by a technician, Complain was no picture but audio was present.

I passed by and since she was out, I was assisted by her daughter who was on vacation during the long holidays here in Kenya.

As usual I applied power to confirm the symptom and the result were the same. I opened the TV and took with me the motherboard with her consent.


I went back to my workshop and went straight to the horizontal output circuit looking for any suspect component or burnt area.

I noted resistor (R460) had burnt area around it and after testing it with one leg out of the circuit I found it was okay. Next to that resistor I found a capacitor (C562=10uF/250V) which had top slightly swollen. 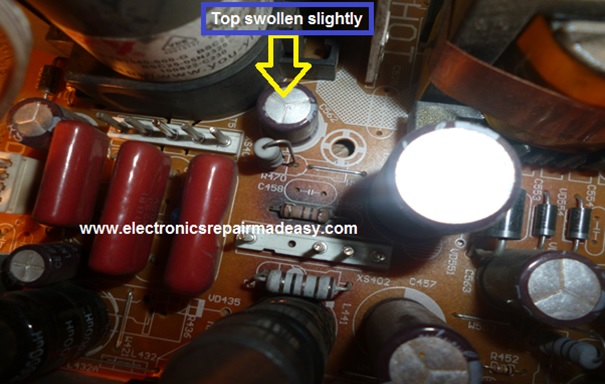 I decided to solder it out of the circuit and do an ESR testing, I found ESR was very high (actually 33 Ohms) 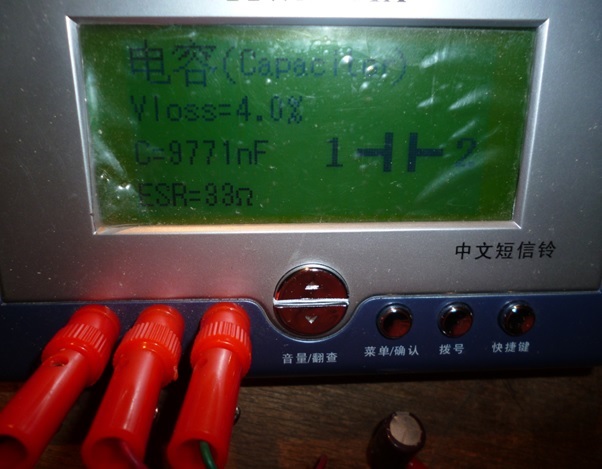 I checked from my component store and found a capacitor rated 10uF/400v and since voltage is not a big issue (higher voltage) I replaced the faulty capacitor with it. 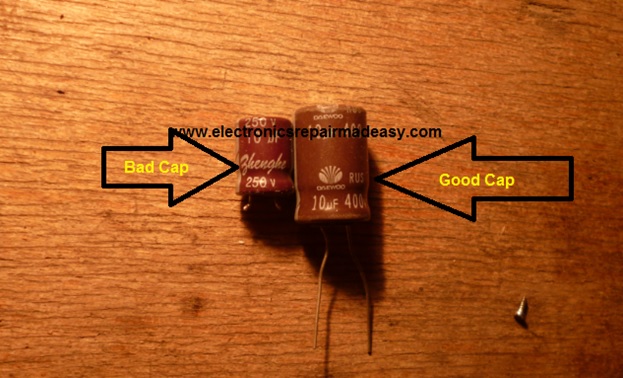 I replaced it and I was very sure that was the only problem and I never continued to do further testing and hence I went back to the owner to fix back the board to the tube.

I re-installed the board and upon applying power the problem was still the same and I was a frustrated man. I decided to go back with the whole TV for comprehensive testing.

When I applied power to the TV upon reaching my shop I noticed a new symptom, The TV was now totally dead!

What could have happened? I really don’t know but for now I had to start troubleshooting the TV from zero.

So I started troubleshooting method for a dead set, To start with I checked the main fuse and found it was okay and very clean.Next I checked across the main capacitor and I got 304 Vdc which again is okay for the 220 volts ac outlet.

From there I checked the B+ voltage and I found zero, I checked other secondary outputs and all read zero volts and with this I concluded the problem could be on the primary side.

I went back to the primary side and this time I checked the voltage at pin 1 of control i.c(STR W6554A) and got 304Vdc same as the voltage at the main capacitor pins, next to check was pin 3 which is the start-up pin and found Zero volts!

I was not happy with this voltage because I was expecting at least 19 volts dc, I soldered out the i.c out of circuit and tested again and found pin 3 was now 70 volts.

With that I concluded this i.c may be having internal short, I replaced it with a new one and after applying power I got voltage at the secondary side on all outlets and I was a happy man.

Before starting celebrating I noted that though B+ was present at the cathode side of the B+ secondary diode the voltage was not reaching the middle(collector) pin of the H.O.T transistor.

Scanning around the H.O.T transistor I noted a small capacitor across the collector-emitter pins of the H.O.T which was cracked (102/2Kv). 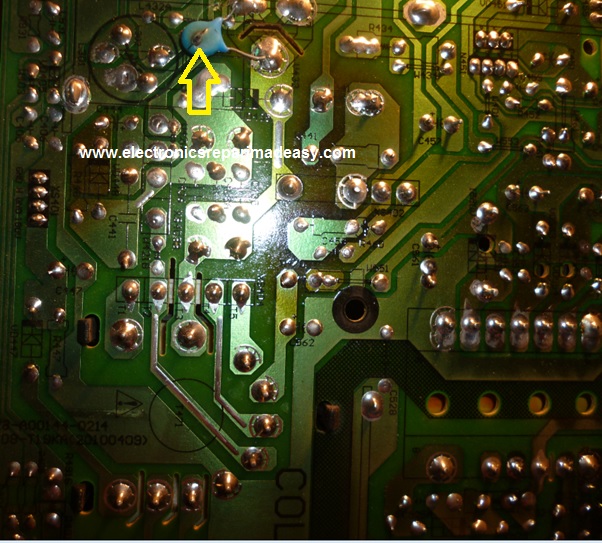 I soldered this capacitor together with the H.O.T transistor out of the circuit and once again applied power using the series bulb and still I could not get the voltage (B+) at the collector pin.

So what is blocking the B+ voltage? I did a voltage checking from the cathode end of the B+ diode and got 113 volts.

I followed this voltage and lost it across R470, on one side of this resistor I got 113vdc and the other I got zero volts. I soldered out one leg of this resistor and it tested open circuit. 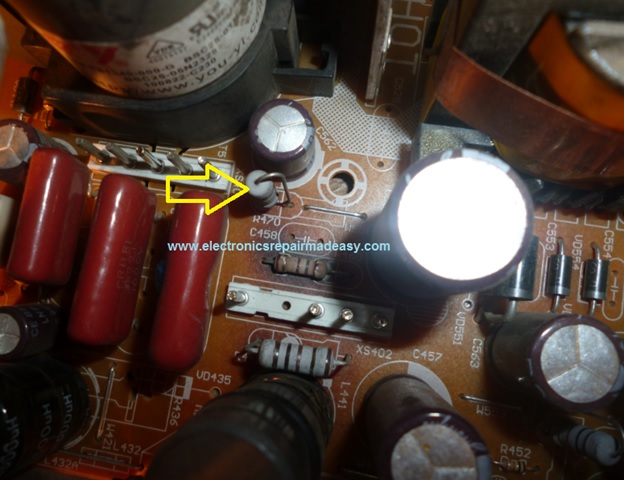 I noted it was also acting as a fuse and therefore I suspected a shorted component down that line (B+)
I replaced it with a jumper wire and again I was getting around 1 volt at the collector of the H.O.T.

I suspected there could be still a shorted component down that line and I was not able to pick it using my meter and therefore I decided to use the series bulb and lifted one leg of the Capacitors (snubber) with one leg at the collector of the H.O.T transistor and the other at the emitter (ground).

I just picked the small capacitor (C435A=471/2Kv) and lifted one leg from the circuit and after applying power I could now get the 113 volts dc at the middle leg of the H.O.T transistor and with that I concluded that this capacitor was failing under load and that’s why I could not pick it using my meter. 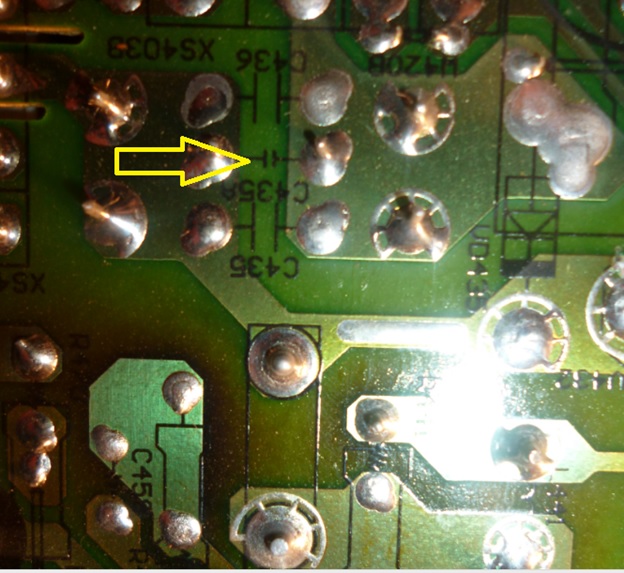 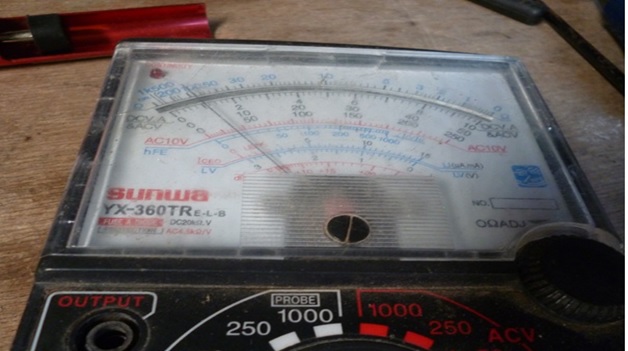 Testing the H.O.T transistor I was surprised to find that it tested okay and I decided not to replace it with a new one although I had one to see what will happen.

I re-installed old H.O.T and the other components and after applying the power I was surprised to see the TV come back to life with the old H.O.T, I tested the TV for over two hours and still no problem noticed.

See you in the next class friends... 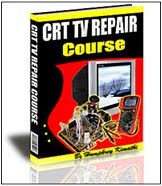