I meet a friend on my way home and requested me to pass by his house to check on his Television which had a problem.

I agreed to pass by although I had no tools with me, this is because in electronics troubleshooting, there are many tools for troubleshooting, some you must buy them from the shop or do it yourself and others are free.

The free ones include the eyes – this tool is very effective especially if something is on the screen. With experience you can locate the faulty circuit without opening the set or touching the meter by just watching and analyzing the screen behavior.

There are others like sound, smell, touch which are also free but that is a topic for another day. So I entered the house and I was shown the TV and it was already on.

I could see the picture was very clear and no sound at all. I asked his son a little background of the problem, so I switched to the other equally important tool and still free....the ears…after listening to his long story I was more than happy when said to me that sometimes sound comes and disappears.

With that one remark I was able to conclude that the audio ic is okay and this on and off could point to loose connection/ dry joints/ Capacitors failing on the audio circuit.

As if that was not enough he added another observation…sometimes when the audio disappear he push a little at the turner connector at the back of the TV and sometimes this also restore the audio…this again to me was another golden tip…with this I finally concluded that the problem is definitely a dry joint or loose connection and with that I promised him that I will come back the following day with tools to open the Set and I also assured him that it is certain no spare part will be used to restore the problem.

I applied power hoping that I have solved the problem first time but I was very wrong…same problem. Now I decided to use live testing by pressing the main board softly with an insulator. 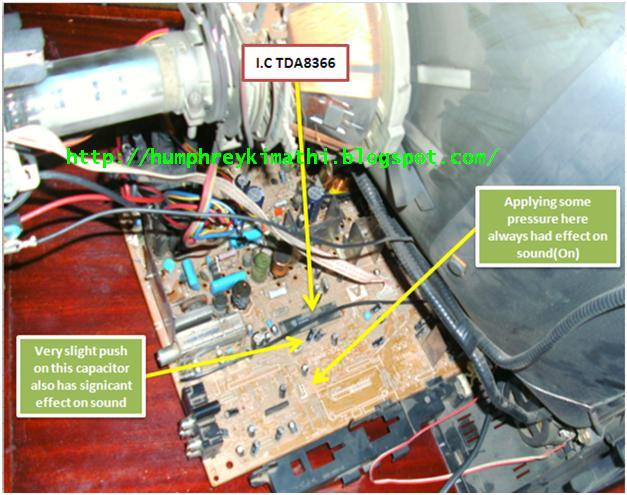 Yes I can now get audio but the moment I release the board the audio fade away, I realized that the board was very flexible and therefore a small pressure was making the whole board bend and therefore it was hard me for to narrow down to the actual area causing this problem.

So I decided to use my finger to push the few capacitors around that area slightly and when I pushed the one highlighted with the arrow above the sound was restored and I suspected it has dry joint on one of its leg and so I turned the board upside down with power off and I again I was not lucky.

Still the problem persisted and now I had to think outside the box…I decided to apply fresh solder to all the 56pins of the i.c nearby without caring which pin is which because I had no circuit diagram to help identify which pin is which.

After re-soldering all the 56 pins of this i.c tda8366 and re-tested, finally the audio problem was restored back to normal.

I applied pressure again on the board and the sound remained and with this I concluded the audio problem was now fully solved.

Tip: when using this idea of pressing on the board to locate a loose connection or dry joint always bear in mind that a small pressure on one end of the board can have an effect at the far end and therefore you can waste a lot of your time thinking that the problem is where you have applied pressure while the problem is on the other end..Please keep this in mind.