How to access the CRT neck board of CRT monitor

CRT monitor and CRT Television have a lot in common in terms of Circuit working and hence one can easily use the knowledge in CRT television to repair CRT monitor.

The first time you open up a CRT monitor can be quite a challenge because components are quite congested than in the Television.

As a technician this should not discourage you because after all it was assembled by a man/woman like you. Of particular interest is the small CRT neck board in monitors because it is fairly shielded and therefore to access the small board can be quite a challenge for the first time.

In this article I am going to point out some few things you should do to access this board if you need arises like when the CRT monitor has color problems like the one shown below. 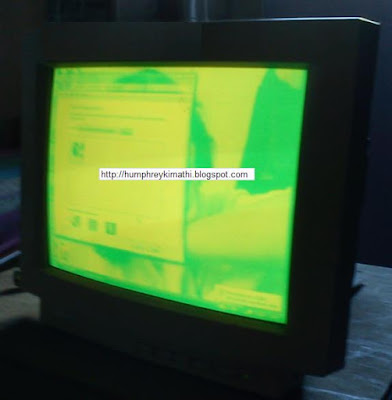 If you are in Television/monitor repair you can narrow down to the faulty circuit if you understand circuit functions by just watching the screen even before opening the set.

On the case at hand we have the screen with color problem. The screen is covered fully and therefore we can conclude that the Power supply, horizontal circuits, vertical circuit, the fly back transformer are all working well and should not be considered for repair.

So the best place to start out troubleshooting is the small CRT neck board, therefore we can now open the set and go straight to test our hypothesis (please make it a habit to take time to make proper diagnosis from the visual and audio clues even before you open up a Television or Monitor, it will really save your time)

When opening up any equipment for the first time it good also to take note where connectors are attached so that you won’t have problem when reassembling, basically reassembling is the opposite of assembling so you will be reversing what you did when re-assembling. After opening a few set everything will become auto.

With that here we go….The inside of CRT monitor 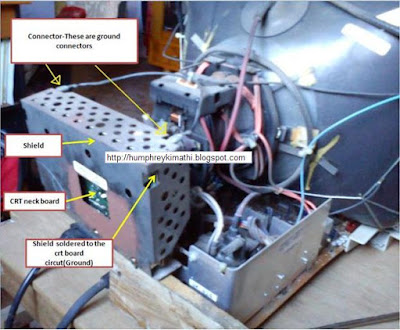 As you can in the photo above the CRT circuit board in monitors is shielded and therefore in order to access the CRT neck board which is our mission we have to open up the cage. First we have the connectors and these you can easily remove them from the connection points by hand because they are not soldered, next you will find some connection between the CRT neck board and the shield which is actually soldered and here you will need to use your hot gun to solder it out.

If you have removed all the connections then you should be able to remove the shield pretty easily but if you find that it still becoming hard to remove then probably there is still a connection which has not been disconnected. Look for it carefully because if you force it out you may do some damage to the circuit.

After you have removed the shield then normal troubleshooting should continue without any cause for alarm.

Wishing you all the best