This Goldstar television came in with the customer complains the picture has a problem…so I powered the television to confirm his report.

As a technician it is very important to confirm what the customer has said in his presence otherwise the set might have gone to another technician with no color symptoms and when the customer picked it from technician A he/she didn’t bother to check the condition after staying at this technician A for six months with the usual excuse of lack of spares.. And was just returned to the box and brought to technician B who in this case happens to be you.

No color symptoms you have figured it is not a big deal and therefore you will hold it a bit to attend more serious repairs...so two days later you decide to work on that set with no color.

So you apply power with your eyes fixed on the screen to confirm what the customer told you two days ago. Pressed POWER ON button and nothing happens.

Checking on the power outlet it working well and therefore you decide to open the set to see if the fuse is gone and when you finally open the television you notice the fuse is okay but a lot of the circuit has been tampered with and components even missing including the microprocessor, you know how much it cost in your local currency.

Just when you have confirmed the above here comes the customer coming to see the progress of the set and as you begin to thank him for coming your way so that you can show him how his set was abused by the previous repairers he tells you that he only knows you and if you are not able to fix his set just bring it back the way it was with” NO COLOR SYMPTOMS’. Or he calls 911.

These things happen and if they have not happened to you yet please take my advice otherwise history does repeat itself.

So I applied the rule above and I switched on the Goldstar television and I observed the following:-

1. The set came up beautifully and I noticed the picture was partially closed with a black slip below and on top of the screen. 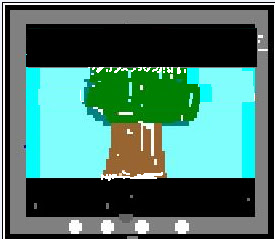 As a technician you can make a lot of conclusion just by watching the screen if you have a good knowledge on how that equipment circuit works.


Let do some conclusions from the above observations.

Beside the picture is covering the whole screen width(horizontal) and therefore we can conclude that the horizontal circuit, primary power supply and the audio circuit are okay and therefore not considered for trouble shooting.

So my conclusion was that there must be a problem with vertical circuit of that television.
I open the set looking for the vertical circuit and after scanning a bit I noticed three capacitors which have their top swollen a bit as you can see in the picture below.

Latter I checked my circuit diagrams achieve and I got this circuit which has a circuit near that television because I could not get the exact circuit and I observed the following. 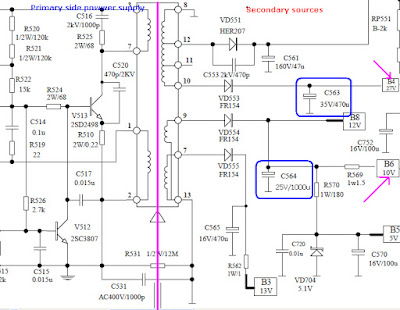 In the above diagram notice the two filter capacitor for the secondary source B4 27 Volts and B6 10 Volts. Both supplies for the vertical circuit with ic LA78040 shown below.
Also I hope it is good to point out here that almost all ics are feed with two or more power sources as seen below on this ic and many others. 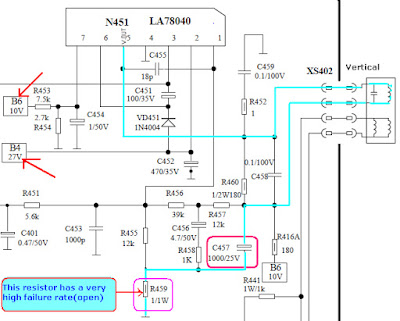 On the circuit above you can capacitor C457 1000/25V which was also swollen has also some effect on the vertical circuit because as you can see the vertical pulses from the ic passes through the vertical yoke through this capacitor down to the ground via 1 ohm resistor R459.

As you know capacitors does not drive direct current therefore only vertical pulses will pass to the ground. Also note that if the resistor 459 (1ohm/1watt) open it will also have some effect on the vertical circuit…this resistor has a high failure rate and therefore be on look out whenever you have a vertical problem.

Email ThisBlogThis!Share to TwitterShare to FacebookShare to Pinterest
Labels: Television